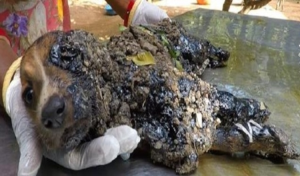 This made me believe that good people are still live. God bless each one of you!

Two little dogs had found their way into a garbage dump where tar was all over the place. They couldn’t move because they were stuck. On their small bodies, the thick tar hardened into a strong mass. It was so heavy that they might not have had time to take a breath.

When Animal Help got there, they saw a young puppy under a table. Only her eyes can move for the little one. They picked up her stiff body and dragged it to the vehicle that was coming to help. The kind person who called around for the puppies told the people who came to help that there was another one under the rubble. He was also going through a hard time. They pulled him out of the dust quickly. The people who came to help knew they had to hurry back and help the puppies before they couldn’t breathe at all.

They gave them painkillers and medicines to make them feel better. Next, they had to think about how to get the tar off. The people taking care of him used oil to get most of the tar off. Before they were washed again, the young puppies desperately needed to take a nap. The dogs were put to sleep in a bed.

Then, though, Pet Help got a phone call right away! More young dogs covered in tar were found. It seemed like two more dogs had come over to check on the puppies when they were crying for help. After that, they also got stuck! Now there were two more tar puppies for the people to save. They took them back to their safe place and hurried to get as many of them to clean up as possible. Then, they were brought back to their siblings. The dogs were all cleaned up the next day. They were given a healthy meal. Animal Help found out that their mother had been located. She was looking for her young ones. Now that they were clean and safe, the people who helped them could go back to the family. We’re glad that this almost-terrible thing came to a happy end.

Pet Help, thank you very much for moving so quickly! Keep in mind that Animal Help gets all of its money from donations. 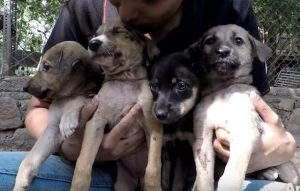