A kitten accidentally got into a school. No one thought he would be the best student, but he was.

Anyone who has a blond kitten or has had one will tell you that they are not like other kittens. Without a doubt, they know how to make themselves stand out, and Tombi’s case is no different.

Everyone knows that cats have a good name in Turkey. There are a lot of kittens roaming the streets of Istanbul, and we could say that there are just as many amazing stories as there are kittens.

Tombi, the kitten, decided he liked being with this group of students a lot. 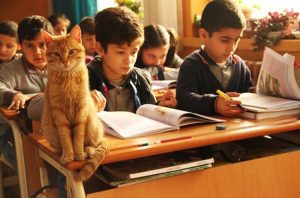 One of them, whose name is Tombi and who is also the main character of this story, just happened to show up at a school. Specifically, he moved into the classroom of some third-graders, who had no idea that having this unique friend would turn out to be such a special thing.

Some stray cats are really scared of people or mean to them, but not Tombi. He went to this school in Izmir, and he liked it so much that he decided to move there.

It didn’t take long for the kids to start treating him like one of them. 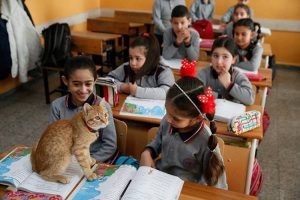 The teacher of this group of kids, Ozlem Pnar Ivaşcu, says that when the kids saw Tombi walk in, they were interested in him. You might say that they fell in love at first sight. The kids really liked the kitten, and it seemed right at home with them.

But not everything was perfect. The school’s leaders were not completely sure that having a pet in the classroom was a good idea. They didn’t think Tombi was completely safe and thought that he might give the students a disease. 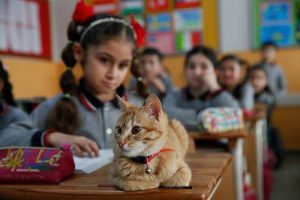 So they started to say that Tombi needed to go to a better home. The kids were sad about having to say goodbye to their beloved pet, but there was nothing else they could do. They found a good place for the cat to live, but then something strange happened.

Tombi, who was always known for being happy and ready to help, stopped eating. He was sad for three days, so his teacher, Ozlem, tried to take him home, but he was still sad there.

Tombi was very sad to be away from his group of students. 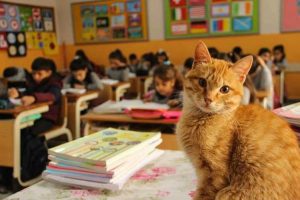 But it wasn’t just Tombi who was sad-looking. The children also missed the cat. Ozlem says that the cat was never a distraction. In fact, he says that it was the opposite. Some of the troubled students were able to focus better on their homework and learn more because of the cat.

Ozlem said: ,,When he first came to our class, I noticed a change in how the kids were acting. They stopped running around in the classroom and were more careful. They couldn’t wait until the next morning to go back to school, which is unusual for some 9-year-olds.” 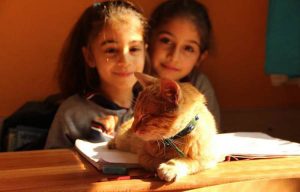 When Tombi’s classmates heard that their beloved cat friend wasn’t doing well while they were away, it made them sad. They sent him letters and drawings.

Ozlem is a teacher who works hard and cares a lot. So, she took it upon herself to get Tombi back to the kids who loved and missed him very much.

The kids wrote a lot of letters to Tombi asking him to come back. 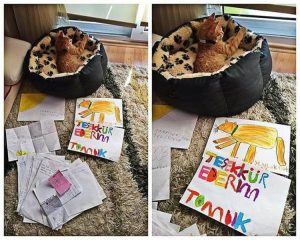 Their story spread quickly through social media, and soon after, a local news station picked it up.

After all the noise and fuss, the school’s leaders gave in and let the cat go “home,” or back to the school where he knew he belonged. Now, they are all really good students, and Tombi is one of them.

Ozlem says that Tombi helped his students do better in school. 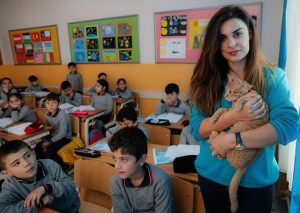 Did this story make you smile? Give it to someone who likes cats as much as you do.

This is a happy story, and the world needs more of them.