A hiker who couldn’t hear fell 300 feet. When she was found, she surprisingly wasn’t alone. 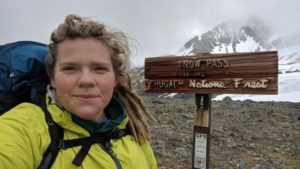 A deaf girl from Tennessee named Amelia Milling isn’t afraid to take on new challenges. Most people her age would rather stay home and play on their iPhones, but she would rather go on adventures. So she decided to walk for three days in Alaska, which has some of the hardest terrain in North America. She lost her balance and slid down the side of a snowy mountain in Alaska. She fell almost 300 feet, landed on a rock, and then slid another 300 feet. She was lucky that she didn’t break any bones and could still walk. Amelia even met Nanook, a white Alaskan husku rurru, who she called her ,,guardian angel.” She thought it was a white wolf at first. Amelia was scared because wolves can hurt people. Amelie saw that the white dog was wearing a hat when it got closer. He was a route guide dog who helped find and bring back hikers who got lost on the mountain.

,,When I met Nanook for the first time, I thought he was a wolf.” 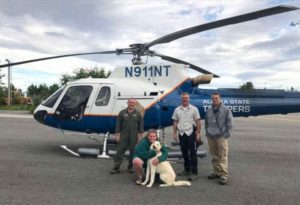 Then I saw the small silver coin and knew he was there to help me. Nanook didn’t leave. Instead, he helped Amelia put the raft back together and stayed with her all night. When she couldn’t get across the deep water at Eagle River Crossing, he even used her baskrask strars to pull her out. ,,I knew he really cared about me when he met me as I opened my tent in the morning.” Amelia said. ,,He’d been sleeping next to me all night. He also helped out in other ways.”

Amelia had a GPS transmitter that she could use to send a signal for help if something went wrong. Alaska State Troopers risked their lives to get the signal, and an emergency airsraft took her and Nanook to safety. Even though the rescuers helped her get back home, she thinks Nanook is the real hero because he saved her life.

,,I found out that the dog is a guardian angel. I told him more than once that I loved him and that I wouldn’t forget him.”

Watch the video below to find out more about Amelia’s time with Nanook!