After Being Hungry For a Long Time Thailand’s Oldest Elephant Has A ,,Mobile Skeleton” 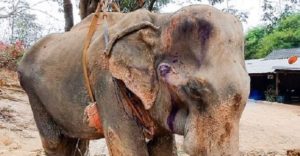 This is the dramatic moment when rescuers fought to save an elephant.

He had been left to starve at a Thai tourist camp that was closed because of the coronavirus. The elephant was found ,,days from the end.” 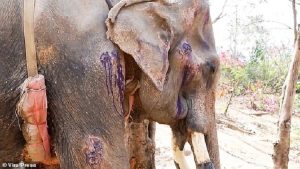 It was sad that the elephant was left to starve. He got so thin that his bones could be seen through his skin.

Khun Pan was found with sores from lying on hard, dusty ground. His long ivory tusks had started to weaken and crack.

When people saw how bad the elephant looked over the weekend, they were shocked and called the vets. On Saturday, vets from a nearby animal hospital in Pattaya went to Chang Siam Park and found that the elephant was too weak to be saved.

They had to lift the elephant ur with leather straps that were tied to a nearby tree to give it support and help it stand. The doctors also put in an IV.

Lee said:,,I have 37 elephants at the camp, and they’re all having trouble. Unfortunately because he is old, Khun Pan is the weakest elephant.”

,,Because of the virus, there are no tourists, so I have no money to feed them. I can’t think of anything else to do.” Lee, who also puts on shows with monkeys dressed up and riding bikes, said that the elephants at the camp used to make money by doing tricks for tourists and giving them rides. He also said: ,,I’ll do my best to look after them. I hope that an expert can give them better care. If there are no more tourists, I’ll take them back to my village.” 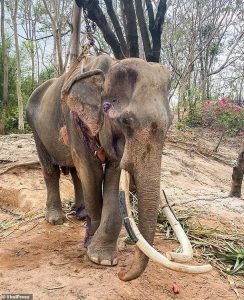 Vets and kind people from the area who went to the park on Saturday fed the starving elephant some bananas and sugarcane. The next day, he was a little stronger, and the vets kept taking care of his wounds and sores. Khun Pan was allowed to stay at the park because of worries about the elephant’s health, and he is still there today. 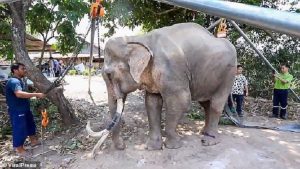