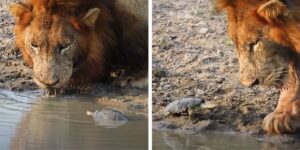 It could have looked to these thirsty lions like just another place to drink water and cool their throats. But it turned out that it wasn’t just a puddle. It was where a little turtle lived. He didn’t seem to want anyone else around either. 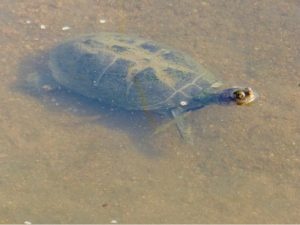 Reggi Barreto, a safari guide and photographer, was with a client in the MalaMala Private Game Reserve in South Africa when they saw two big cats. Barreto grabbed his camera, but he had no idea what was about to happen.

Barreto told LatestSightings.com: ,,I knew the lions would be looking for water to drink, so we waited in the right place with the sun in our favor. What came next caught us by surprise. At the watering hole, a turtle lived there and watched the lions drink.”

And here’s what happened:

The brave turtle didn’t think twice about going up to those much bigger lions, even though they seemed to think of him as nothing more than a bother. Even so, Barreto thought it was a once-in-a-lifetime chance to see such an unfair tie. He said: ,,It was a very unusual thing for me to see and record.”