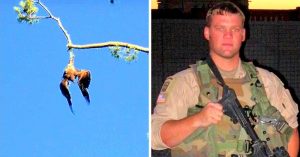 Residents of Rush City, Minnesota, had been noticing for more than 2 days that a distressed bald eagle was hanging from a tree 70 feet above the ground. Even though many people in the area didn’t care about the bird, some thought she already passed away. But Army veteran Jason Galvin knew he had to do something.

Jason used his binoculars to watch the bird for hours before he realized that she was still alive. He decided to put his training as a soldier to good use and use his rifle to set the bird free. Jason was determined to help the sick eagle, even though his neighbors kept telling him not to because of “compromised security measures” and “liability issues.” When Jason got to the tree, the sun was so hot that it burned his skin. He pointed his rifle at the branch where the eagle was stuck and fired. Over the next few hours, Jason carefully fired more than 150 shots at the same spot on the branch. One lucky shot finally got through the branch, and the eagle fell into the bushes below. 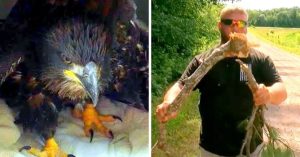 The eagle is now getting better at a rescue center in the area. She was given the poetic name “Freedom” because Jason set her free on the 4th of July. Once she is all better, she will be sent back to where she lives. What a rescue that stopped your heart! Let’s spread the word and thank this brave veteran.

Watch a report on how the kind veteran saved the bird by clicking on the video below.