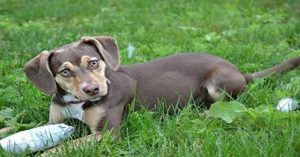 She had two broken legs, three broken ribs, and carpet in her stomach (likely ingested after being starved). The people who worked at the shelter knew she was special and were thrilled when a nice couple took her home.

In 2017, Peanut started acting strangely one morning. She kept barking as she ran around the house. Her mother didn’t know what was happening. Peanut kept barking as if she wanted to say something. She ran to her dad and kept barking at him until he let her out. When he did, the strangest thing ever happened. Peanut ran quickly out of the house and into the field behind it. Her mother and father came after. Peanut led them to a ditch where a naked three-year-old girl was lying in a ball. They were shocked and called 911 right away. The little girl was cold and shivering, so Peanut’s dad put his shirt around her. Peanut’s dad wrote in a letter to the Delta Animal Shelter that by the time the ambulance and police arrived, the little girl could only say one word: ,,doggie.”

A little girl’s life was saved because of Peanut.

In a news release, the Delta County Sheriff’s Office in Michigan confirmed the story and said that Peanut had alerted her owner to the presence of the child. An investigation found that the child was living in terrible conditions. Since then, Child Protective Services has taken the child in.

Peanut’s parents wrote the most amazing letter about their super-dog to the Delta Animal Shelter:

,,Dear Shelter, I have to tell you a touching story about how great our little Peanut has been. She has really helped our family out, and we love having her around. We are so happy that we were able to take her into our home and give her the love and family she deserves after hearing about her sad past.” 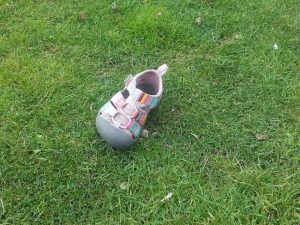 I think, though, that she still carries with her some ,,sixth sense” about her past life.

Today, a little girl’s life was saved by Peanut. She has been so helpful to us, and now she is helping other people. We can’t say enough good things about Peanut and how grateful we are to have her in our lives. She is now part of our family, and she is still alive because of wonderful people like you at the shelter. Without her, not only would she have been gone from this world, but so might have been this little girl.