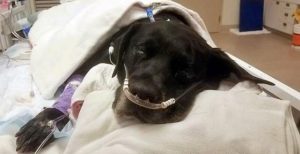 A pregnant mother dog was abandoned at the Boone Area Humane Society after she had been in labor for 24 hours. She underwent an emergency C-section, coded twice during the procedure. She was luckily stabilized. In the ICU at Iowa State University’s College of Vet Medicine, she received a blood transfusion and was under close observation.

The Boone Area Humane Society posted on Facebook: ,,The doctors at ISU also told us this gal is a senior dog and has had numerous litters of pups in the past. She should be enjoying her golden years. Instead she was bred and then abandoned when her labor proved tough.” 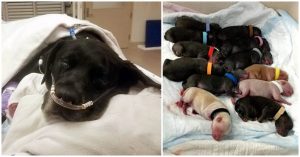 Sadly, despite veterinarian’s best efforts to rescue them, all 21 of the puppies passed away. With 21 babies, there is no possibility the pups acquired adequate nourishment while they were inside the mother. The puppies were all undeveloped. 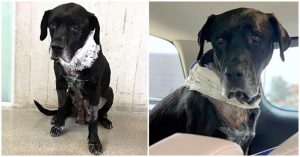 The mother dog is known as Ruthie. She is growing better all the time. She can eat on her own and stand up to go outdoors. Ruthie has already been discharged from the hospital and is now living with her new foster family. There she will continue to rehabilitate.

The Humane Society is doing everything they can to bring charges against the individual who caused Ruthie’s suffering in the meantime. They acknowledge that the situation is difficult given Iowa’s lax animal protection regulations.