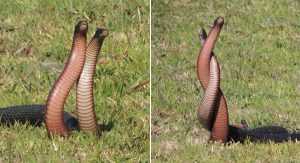 When she saw two red-bellied black snakes fighting in her yard, Kristy Gray had a front-row seat to a magnificent display of athleticism. Since the beginning of September, Kristy from Topi Topi on NSW’s Mid North Coast said: ,,We’ve noticed numerous lone snakes.” 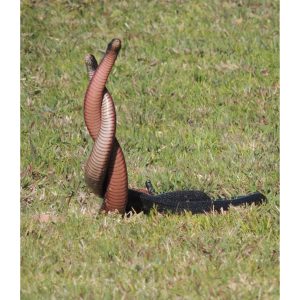 ,,In less than a week, we have seen two couples out in the open, a worrying incidence no doubt due to the dry hot weather.” she continued. Despite how they seemed in the photographs, according to Great Lakes snake expert John Smith, the snakes were not mating. 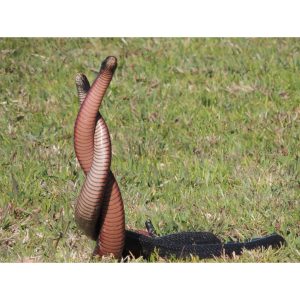 John said: ,,When they’re mating, they just lay next to one another with their tails overlapping. They don’t entangle or rise up like they do in the photographs.” He guessed that: ,,These two are presumably fighting or sparring for the attention of a female.” 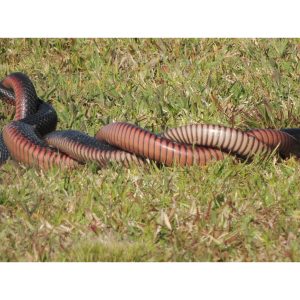 They only entangle one another and continue doing so for a time before one gives up and flees. They don’t bite one another very frequently. Although Kristy was delighted to have the chance to see anything like this, she was not without concerns. 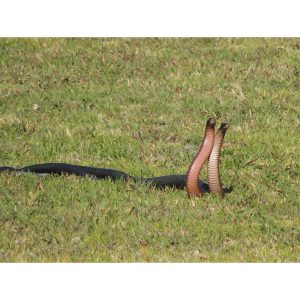 Standing so close to the snakes was a little disconcerting. However, I couldn’t resist the chance to shoot them. Eastern Australia is home to the elapid snake known as the red-bellied black snake. A bite from one of these snakes is less dangerous than those of other Australian elapid snakes, however its venom can still cause serious morbidity.