This image of underwater animals can be especially intriguing if you’re a fan of the well-known cartoon television series SpongeBob SquarePants. SpongeBob and Patrick clones have been found at the ocean’s bottom by a research vessel. The Okeanos Explorer research ship, run by the National Oceanic and Atmospheric Administration, was around 200 miles off the US Atlantic coast and submerged at a depth of 1885 meters when the bizarre encounter occurred, according to NPR (1.17 miles). 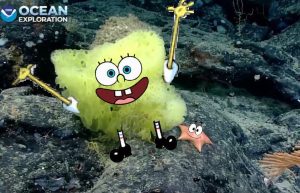 Christopher Mah, a research associate at the National Museum of Natural History and a collaborator with NOAA, spotted the yellow sponge and pink sea star near to each other. It immediately reminded him of SpongeBob and his best friend Patrick. 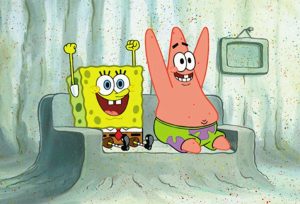 Mah tweets: ,,I typically avoid these references, but WOW. Patrick and Sponge Bob in REAL LIFE!”

Despite the fact that they may be the closest friends in the cartoon, SpongeBob and Patrick are competitors in the real world because sea stars eat sponges. Mah claims that it is quite likely that the starfish is exactly adjacent to the sponge since it is about to be at least partially consumed. The truth is a little crueler than a cartoon may imply.