The Moultrie Colquitt County Humane Society received a call from a local man who claimed a strange looking dog had gotten into his yard and was begging for help. When officers arrived to pick up the dog, they were shocked. The dog had the head of a pit bull on the body of a dachshund! They had never seen anything like it before. 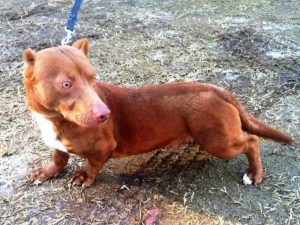 After the rescue, the shelter confirmed that the poor little guy was actually a one-year-old pit bull Dachshund cross who was homeless. They named this adorable animal Rami and offered to adopt him. Rami immediately went viral on social media, as people were mesmerized to see a puppy with such a rare morphology!

Within days, the shelter was flooded with thousands of adoption requests for this adorable boy! 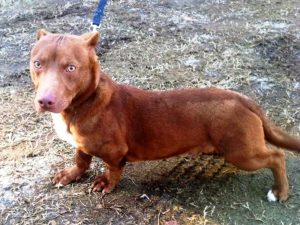 Because of the high risk of being used for breeding, the shelter eventually rejected the idea of adopting him and accepted Rami as an ambassador dog. Rami now lives like a champion with his people at the shelter. Despite his pit bull DNA, Rami is a sweet little guy who is afraid of cats and just wants to be cuddled! 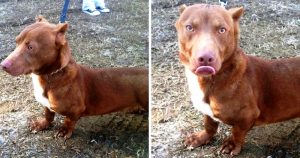 We must emphasize that we do not support designhunderacres in any way. Breeding incompatible breeds carries serious health risks for the mother dog and her puppies. But in Rami’s case it is a completely natural occurrence. We can’t help but care for this little darling and give him the best life possible!

Watch the video below to see Rami’s story of discovery and his adorable and eccentric personality!