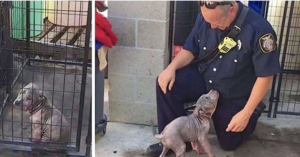 During an emergency call, firefighters found a shivering dog left in the rain near a highway. Her cruel owner had not only abandoned her, but had chained the three-month-old to a tree so she couldn’t escape his desperate situation. On a cold day in Sacramento, Portion firefighters spotted the dog but were unable to stop her during their efforts. 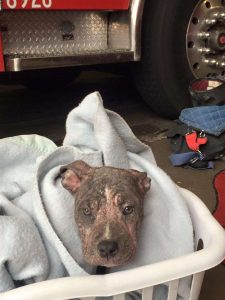 But the firefighters did not forget the frightened animal and returned after the call to rescue her and take her to the fire station to warm her up. Firefighter Mike Thawley vividly remembers how the dog was shaking and how he rescued Chunk. Mike and his colleagues gave Portion a nice bath, covered her up and gave her all the love they could to keep her warm. 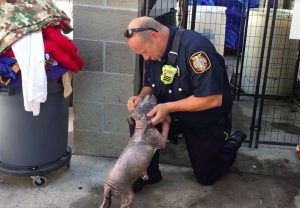 Unfortunately, this puppy not only needed warmth, but also suffered from a severe case of mange which, like everything else, was causing her to lose her fur due to neglect. She was taken to a boarding kennel, where she was treated for mange and examined to make sure she was doing well. But while Piece was recovering, there was one person who couldn’t stop thinking about her. 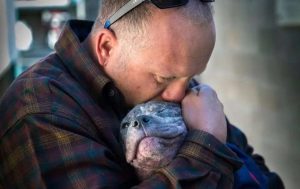 Firefighter Mike Thawley also had to go home to visit his four-legged friend. ,,We were all a little wild with her.” the Sacramento Fire Department wrote on its Facebook page. Piece couldn’t stop wagging her tail when she saw the firefighter who rescued her. But Mike wasn’t just visiting, he was accompanied by his wife and three young daughters, who wanted to hug the firefighter. Four months later, Chunk was well enough to leave the shelter and move in with Mike and his family.