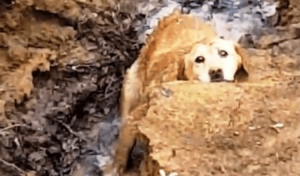 Johnny Rickman, the head dog warden of Lawrence County, Kentucky, received a wanted ad for a dog named Ginger. Johnny searched desperately for Ginger, but there was no sign of her. A few days later, Johnny finally found Ginger howling by a river. She was completely trapped on the muddy ground. 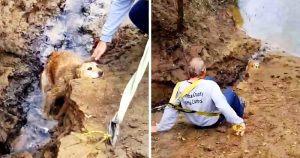 Johnny got help from a friend and climbed down the slippery slope to reach Ginger. He stroked the frightened dog and began to free her paws from the mud. With great effort, Johnny lifted her up and took her in his arms. But just as he was about to take cover, he slipped on the wet ground and fell. 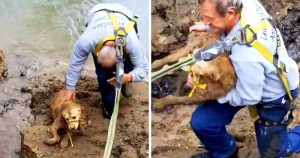 Despite this minor setback, Johnny did not give up the rescue. His knee was injured, but he dragged himself to a point where the ground was relatively solid. He endured the pain in his legs and supported his weight with his hands as he climbed. After a grueling climb, Johnny heroically managed to carry Ginger to safety! 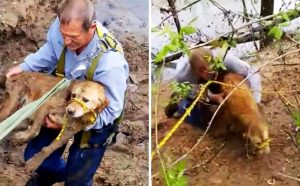 Ginger was covered in mud and very weak, but she hugged Johnny to thank him for saving her life. She was taken to the Tri-County Veterinary Clinic where she will recover before being reunited with her family in the coming days.

We truly admire Johnny for his incredible honesty and determination to save this helpless dog!