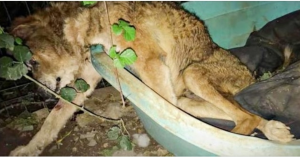 An old dog that should have been at home enjoying life with his family was instead dumped in the garden. The poor dog had to endure the cold and rain. His joints ached and he was hungry. By the time a rescue organization was contacted and came to the dog’s aid, the dog had already fainted. They thought he had recently died and cried for him. When one of the rescuers approached, he discovered that the old dog was still alive! Even though his body seemed stiff and slumped over the edge of the kennel, the dog struggled to hold on. 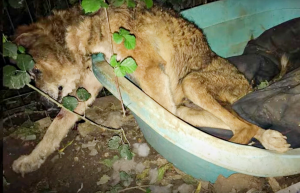 Fortunately, this old boy got a second chance. They weren’t sure how long the poor old man would live, but they couldn’t let him die like this! They took the dog and gave him the name Kesto. Kesto’s family didn’t want him anymore and didn’t even say goodbye to him when they left. He had devoted all those precious years to them and they didn’t care about him at all. How evil! 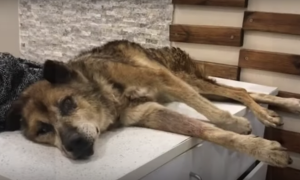 Kesto was taken to the vet who gave a realistic assessment of his condition. The doctor noted that Kesto was at least 15 years old and would not be aggressive in his treatment. His goal was to keep Kesto comfortable and happy. The old dog was hypothermic and had a large tumor in his abdomen. The mass was causing internal bleeding. Kesto was treated with a warm saline solution that relieved the hypothermia. He was also given medication to stop the bleeding. 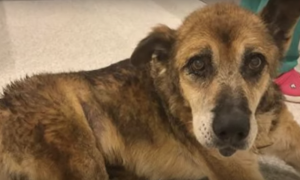 In just two hours, Kesto recovered dramatically. He could even lift his head. The vet said he was healthy enough to be admitted into care. One of the rescuers volunteered. She had a soft spot for old dogs and was eager to take him home. Kesto enjoyed his first real meal, which was not cheap. He loved it! 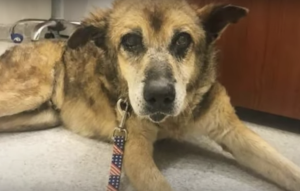 His new foster mom then showed him where he could sleep. Right next to his new foster brother, cozy inside the house! Kesto had never imagined that living in a house could be so idyllic. He felt comfortable, his tummy was full and he had a soft bed to lie on. For the first time in his life he fell asleep happily. 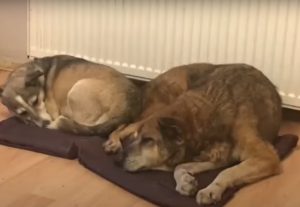 Kesto’s new mother realized he didn’t have long to live. She wanted to give him everything she could, so that he would leave with happy memories. Every day she made sure to love him and give him treats. She even went for short walks with her new brother. He was really happy. He even lay on the couch while his new mother watched TV. 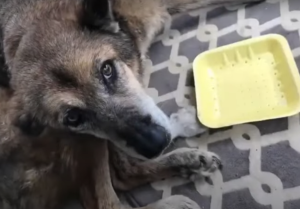 The big puppy lived a few more weeks. Of course we would have liked Kesto to live longer, but Kesto had the chance to experience what a dog’s life should be like. And that’s all this sweet boy wanted.

Rest In Peace sweet Kesto. We will miss you. Thank you so much to Kesto’s rescuer and foster family! We are so happy that he was able to end his life surrounded by love!