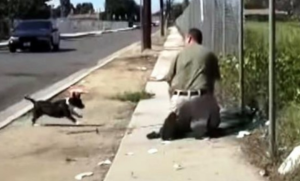 Oreo, a pit bull and dachshund mix, was abandoned and lived on the streets for a long time. A local man had always fed and cared for her, but Oreo didn’t want to be rescued. According to ilovemydogsomuch, when the man saw Oreo with her beloved puppy Cookie Monster, he knew he had to call a rescue team. 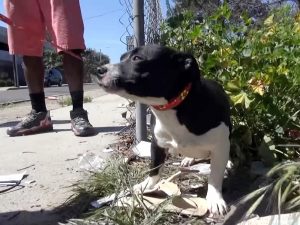 In this video, we see rescuers arriving at the highway to rescue Oreo and Cookie Monster. As Cookie Monster flees into the crowded roads, the rescuer sets up a net and quickly rescues him from mortal danger. But Oreo is not happy that her baby is trapped and in the hands of a human. When the dog’s mother begins to protest in fear, the rescuers decide to call for help.

The rescuers ask the man who fed Oreo during this time to help them rescue him. When Oreo sees the familiar face, she runs to him and asks him to save her baby. The man assures her that Cookie Monster is safe with the new people. In the end, the rescuers let Oreo kiss his puppy to convince her of their good intentions! 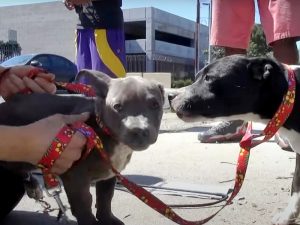 Dreaming of a better life, Oreo and Cookie Monster followed the rescue team to the shelter. After a medical examination, they were transferred to a foster home where they can live a comfortable life as loved and cared for pets! 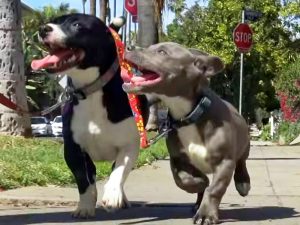 According to a statement from the shelter, the mother-son pair were happily adopted into a loving home and renamed Lady and Reptar. They also love to walk around their neighborhood with a big smile on their faces and have been known to walk slowly due to their deadly cuteness!