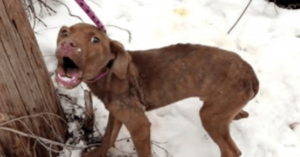 A woman from St. Louis Stray Rescue was walking through the snowy streets when she heard an abandoned puppy’s cry for help. As reported by ilovemydogsomuch.tv, she followed the sound and found an injured puppy shivering and howling in fear in a snowdrift.

Donna’s heart skipped a beat as she approached the fragile puppy. The poor baby was infected from a nasty wound on his side and was suffering from a condition called paraphimosis, which affects uncircumcised men and needs to be treated accordingly. The puppy, now named Weezer, looked so grateful when Donna came to visit. Despite the pain, his whimpers of fear were silenced as she led him to the car. He felt safe and showed it by wagging his tail warmly! 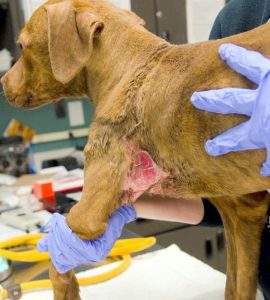 Donna immediately took him to the trauma center where he was treated. Veterinarians determined that the infected wound was caused by a buried harness that her owner had cruelly given her. 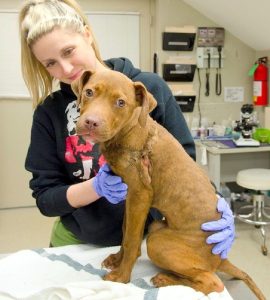 Weezer, estimated to be about seven months old, is recovering well. We are grateful for Donna’s love and care and hope that a better life awaits sweet Weezer. Our prayers and love for this precious puppy!

Watch the video below to see lonely Weezer screaming in pain in the cold!