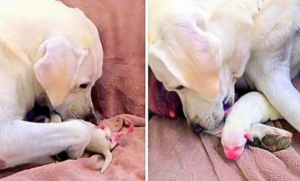 When a female Labrador named Daisy Duke gave birth to eight puppies, she quickly realized that one of them was unusually small and almost too weak to survive. While many animals would immediately abandon the weakest of the litter, Daisy decided to do everything in her power to keep her pup alive, writes ilovemydogsomuch. 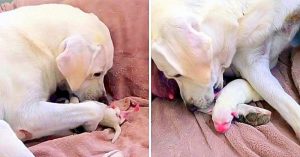 Daisy soon began to spoil the dwarf puppy, named Lucy, with love and special attention. She never left Lucy alone not even for a second. She cuddled and fed her separately to make sure she wasn’t crushed by her much stronger siblings. When the other puppies fell asleep, Daisy would pull Lucy aside and kiss her repeatedly and ask her to cuddle. Every time Lucy cried, the frightened mother’s fragile heart panicked with fear. Desperate, Daisy took the baby in her mouth and licked and nursed her until she felt good again! 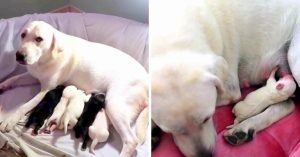 According to experts, runt puppies are often trapped in their litters because their mothers are focused on raising the healthiest offspring. But in Lucy’s case, she was a happy little girl who received all the love and special attention from her devoted mother.

I hope Lucy grows up to be a strong and spirited dog, just like Daisy. Hats off to the spirit of this loving dog mom!

Watch the video below to see Daisy’s touching determination to save her weakest child!