Diana Grib desired to raise a German Shepherd and a Friesian since childhood. Despite her admiration for both species, Diana knew she had to act carefully and responsibly before blindly adopting two very different creatures, writes ilovemydogsomuch. 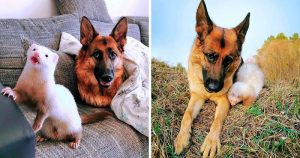 Diana first adopted a German shepherd puppy named Nova and trained her for one year to be affable with others. Over time, Nova has become an extremely friendly dog who takes care of and feeds small animals! Finally, Diana adopted a two-year-old ferret and gave him the name Pacco. She was nervous to present the little ferret to Nova. The dog decided to be patient with Pacco and observe him from a distance for the first few days. Pacco was a shy boy, but he recognized the family spirit in Nova!

Within a few weeks Pack lost his shyness and became Nova’s best friend! They ate together, played together, went shopping together and slept cuddled up together. Diana started taking them on adventures and it was the best part of their lives! Pack loves to hold Nova in his mouth and check her teeth from time to time! As we know, ferrets are complex, loving but also very sensitive creatures. Nova  patient with Pacco at all times and never injures him, even when the ferret craves to play wild. Diana says that Nova and Pacco get along well despite their differences because they are both as brave and curious as each other! Thanks to her careful planning, Diana has realized her dream of raising these two beautiful creatures together and that is something very special! The friendship between Nova and Pacco truly crosses borders!