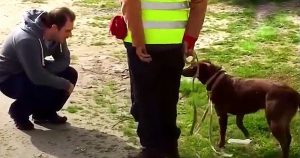 When Pakita the dog went missing three years ago, her father was desperate and scared. He felt helpless and searched everywhere for her, but his hopes were dashed. Never less he never gave up and kept looking for her in every shelter until his efforts were finally rewarded. Three years later, the owner was happy to hear that Pakita was alive and living in a remote shelter where she had led a rather boring and inaccessible life for the last three years. But when he arrived at the shelter to take Pakita home, Pakita’s reaction was not what he expected, writes ilovemydog.

Years of separation and hard life in the shelter had clearly had a negative impact on Pakita. The depressed dog only trusted her caregivers and refused to care for her father. She did not know him at all and moaned when a new stranger approached her. 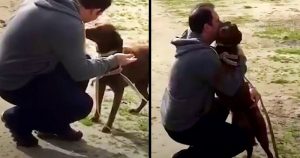 The Father understood Pakita’s anxious body language caused by stress and persuaded him to come closer. Pakita hesitated but her father leaned over and shouted something that made her smell him and for her it was love at first sight! She began to recognize his scent and gradually realized that her beloved father, who had already left, was back to take her home! 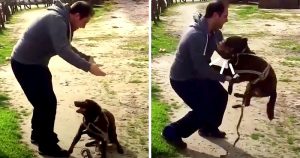 This clip express that incredible moment when Pakita affect her doubts and recognizes her father with ecstatic emotions! In a few seconds she goes from fear to shock, from shock to joy and her father assures her that she will never be alone again.

Watch their tear-jerking reunion on the video below to see Pakita jump for joy as she finally recognizes her father!