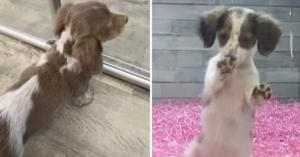 Dayana Davila went to a local shop to see if they had cute puppies for sale. One of the first puppies Dayana saw was an adorable dachshund. She wanted to see the puppy so she could hold it and decide if she wanted to take it home and make it a member of her family. Unfortunately, there was an obstacle to Dayana’s decision. A sweet dachshund in another cage watched her take her best friend and leave. The little pup was sad and patted the window as if she said: ,,Don’t take my best friend away or take me with her!” 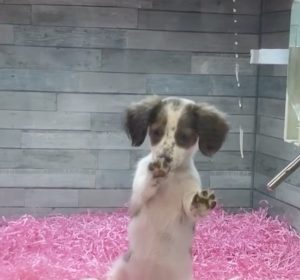 Dayana posted the video of her touching encounter on her TikTok page, which has more than 15 million views. Millions of her followers let her know how sad they were at the sight of the puppy’s longing for his only friend in the world. They were also wondering if Dayana had bought two puppies before she left the store. She posted another video with an update on TikTok and explained: ,,You are wondering if I bought two puppies or one puppy. I didn’t take both because I couldn’t afford both.” 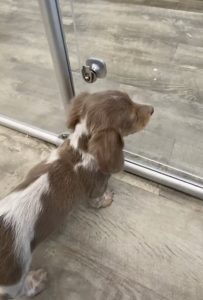 She explained that she was interested in a puppy for so long and could go to an animal shelter and rescue one. She could go back to the shop and save the necessary money to buy two little dachshunds. After some months, Dayana gave her followers an update to say that she was about to get the family a new puppy, but not a dachshund from a pet store.