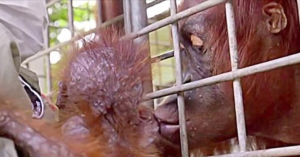 Pregnant orangutan Clara gives birth to baby orangutan Clarita at the Borneo Orangutan Survival Foundation in Central Kalimantan, Indonesia. But shortly after the birth, shelter staff noticed that the newborn was missing from the room, ilovemydogsomuch reported. 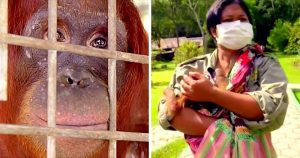 This protected area is located in the middle of a dense forest and is generally free of poachers. But panicked workers did not give up the search for the kidnapped child Clarita. They finally found her, held captive by Rizki, a dominant 14-year-old male orangutan! After rescuing Clarita from the alpha male’s clutches, the workers discovered that she was extremely weak. She was also suffering from a skin disease and needed to be treated immediately in intensive care. After several days of treatment, Clarita was finally out of danger, but she was still very frail. 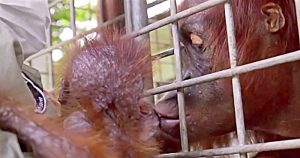 At this point, the operators were afraid to put Clarita back in touch with Clara. Clara had been inconsolable after her daughter’s disappearance, but the operators knew that orangutan mothers would reject and attack their fragile offspring if they believed there was no chance of survival. In this video, we can see how the tense moments unfolded as she was brought to her inconsolable mother. Clara is surprised at first, but soon gives in to her maternal instincts and embraces her daughter with all her love! 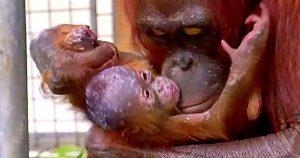 Workers burst into tears when they saw the excited Clara cradling her baby and trying to breastfeed. The mother just wants to protect her precious baby! We wish Clara and Clarita a long and healthy life together!

Watch the video below to see Clara’s painful reunion with her kidnapped daughter!