Steve and Jennifer Hetterscheidt live in Oakland, Tennessee with their dog. The dog’s name ist August. He is also known as Auggie. They adopted the golden retriever dog six years ago by GoldHeart Golden Retrievers Rescue, a non-profit rescue organization in Chester, Maryland that specializes in golden retrievers.

The GoldHeart volunteer network is dedicated to rescuing unwanted, abused, neglected and abandoned golden retrievers and golden mixes and placing them in suitable forever homes. They have been doing great work for the dogs since 1999. Auggie had already been fostered twice (through no fault of her own, according to GoldHeart) before this adorable dog was placed with the Hetterscheidt family and has lived her best life as a dog ever since. Recently, the dog reached a monumental milestone when it celebrated its 20th birthday. What makes this birthday so special? Auggie is the oldest Golden Retriever dog of all time!

At the age of 14, it was doubtful that we would find a continually home for Auggie. Most Golden Retrievers live to be 10-12 years old, and most people are not interested in adopting a dog only to watch it die. But Auggie was not only in his prime, he still had a lot of life ahead of him, as it turned out! 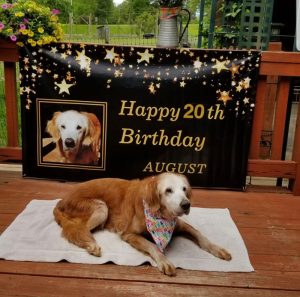 Auggie’s birthday was celebrated with her humans and her canine siblings Sherman, Belle and Bruce with a giant banner and a delicious carrot cake.

Her special event was also promoted by the rescue on Facebook and on their blog! 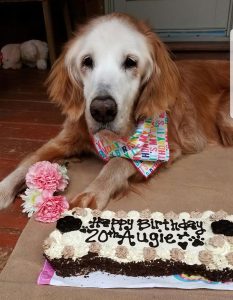 Jennifer told Auggie’s fans that he is surprisingly healthy for his age of 20. ,,She has minimal problems moving. Apart from shaking a little when she first gets up, and she enjoys her daily walks in the garden.” 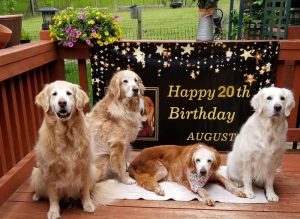 On his blog, GoldHeart writes: “There are a few stories about Goldens. Some are 17 and 18-year-old and even some even 19-year-old. Yet Augie is the first Golden Retriever to turn 20-year-old. 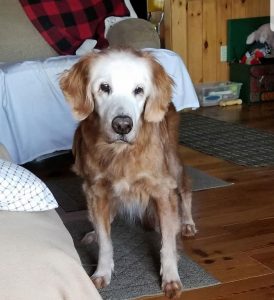 Jennifer explained that Auggie ate a mixture of wet and dry food and took some supplements to alleviate some of the kidney problems she was diagnosed with when she was adopted at the age of 14. 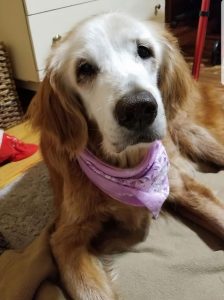 You deserve all the love and celebration. Happy Birthday Auggie. 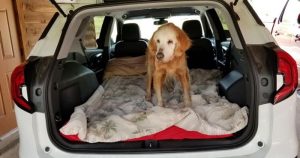 On Facebook, fans flocked to GoldHeart’s page and posts to wish Auggie a happy birthday. 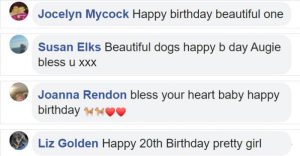 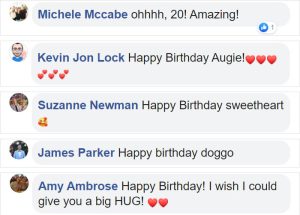 1) Listen to your vet, who knows your dog and can give you the best recommendations and plan measures to keep your dog healthy.

2) Listen to your dog. He communicates on his own without expressing himself. If you see him reacting negatively to food or certain activities, you should do something about it.

3) Feed your dog quality food. Better food will keep your dog healthier and happier. Save you most of the vet bills you would otherwise save on poor quality food.

5) Finally, exercise your Golden Retriever consistently to keep its heart and muscles strong.

Thanks to GoldHeart and the Hetterscheidt family for the great advice.