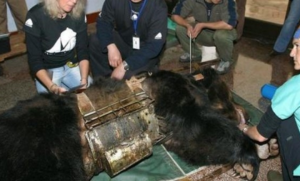 Most of us are used to thinking of animals as pets, writes majesticanimals. Some animals can certainly offer us wonderful companionship. We can reciprocate by giving them a home, love and all the care they need to live happily ever after. 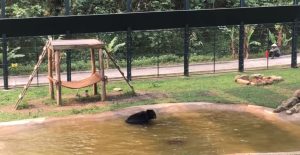 To think that it would be a mistake to be an animal owner, especially when it comes to wild animals, is a mistake. There are still those who consider it normal to exploit animals and deprive them of their right to freedom. They do that in order to make easy money. Despite all the rules and regulations, many wild animals are kept in small, filthy cages to be exploited. 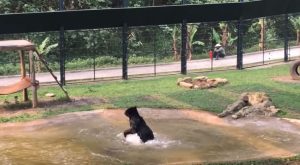 Whether it’s circuses, private zoos or animals that can be booked for events, the rationale can be summed up in one word. Exploitation. The bear is named Tuffy. They rescued him after living for years on a bear bile farm. For those unfamiliar with this harsh reality, bile bears are bears held in captivity to collect their bile, a digestive fluid produced by the liver and stored in the gallbladder, and used in traditional Chinese medicine.

Watch the video that shows the joy Tuffy felt when he jumped into his pool at an animal shelter.