Orphaned Turtle and Rescued Dogs Are Inseparable After Being Raised Together 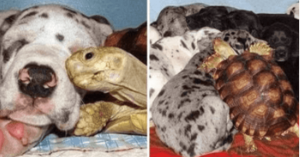 Love is not only found in humans. Animals also have many emotions and form important love relationships throughout their lives. Their presence has a meaning beyond what society thinks. The bond between humans and pets is important, but the bond between pets is even stronger. They often have nothing in common and yet manage to forge an important bond. We can learn a lot from them. They don’t discriminate, they just love each other. 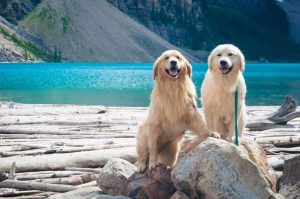 An incredible story of relationship and brotherhood, originally posted by the Humane Society a few years ago, continues to fascinate internet users. A little turtle was wandering alone along a river when a man found it. When he saw it, he rescued it and took it home to care for it and help it. Maybe he can find his family. 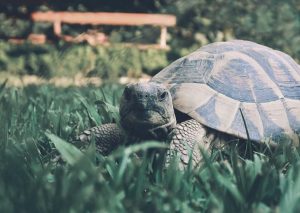 But as the days passed, there was no trace of his family. The man wanted to adopt the turtle, but there was one thing that made him worry. In his home lived a lot of puppies. He wasn’t sure how they would react to the turtle. It’s highly unlikely. But there was a big surprise waiting for him. He placed the turtle next to the puppies. They sniffed it carefully. They accepted it immediately. 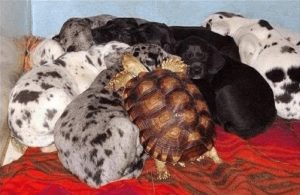 Although some of the young pups were considered a “dangerous breed”, they were sympathetic to the new family member. They got on well with each other and grew up together.