These painful images are going viral on the internet recently. They show a mother dog rescuing her puppies from a house fire. Her puppies are only ten days old. She risked her life several times after the fire broke out. All she wanted was to get all of her puppies to safety. 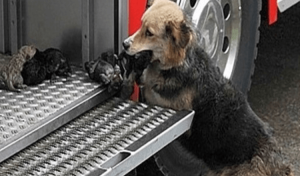 The name of the German shepherd mother dog is Amanda. To save her puppies she went back and forth between the house and the fireplace wagon. Amanda tried to ignore the violent fire and focused on her only goal. The fire was in Santa Rosa de Temuco, Chile. Something exploded and set the fire immediately to the building. 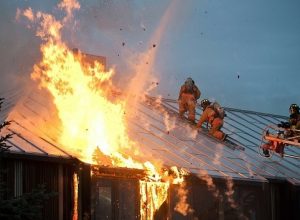 After saving them Amanda sat next to her puppies. She cared for them and gave them a lot of safety and love. Amanda and her puppies were brought to the hospital. Unfortunately one of them died of serious burns. Her name was Amparo.
According to veterinarian Felipe Lara, Amanda also protected her puppies from the vets when they tried to take them from her for treatment. She eventually gave in to the vets and let them treat the sick puppies. She insisted to not take her eyes off Amparo, the puppy who was dying.

Amanda is an example of a mother’s unconditional love for her children and the fact that she would never leave them, even risking her own life if they were in danger. Her devotion to her puppies is truly admirable.
Share. Facebook