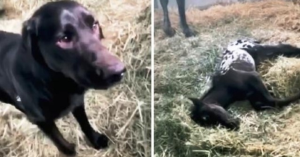 ilovemydogsomuch writes: ,,Maxey Appaloosa Foundation in Colorado is a sanctuary dedicated to the preservation of the native Nez Perce appaloosa horse.” Some employees recently witnessed the first meeting between Aengus and a newborn foal. The foal’s name is Ghost. Aengus is the farm dog. They describe Ghost as unbelievable sweet. 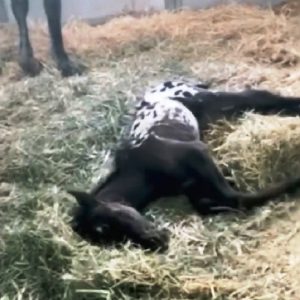 They say about Aengus that he bears great responsibility. He looks after all the animals on the farm at all times. When he heard that the horse’s mother was giving birth, he seemed to be worried about her. However, the guardians did not allow him to approach Ghost for a few hours as the foal was still fragile. Aengus runs around the stable when he finally manages to see Ghost in the flesh. When he enters, he is shocked to see Ghost lying motionless on the ground. But the caretakers convince him that newborn foals need some time to get up on their own. 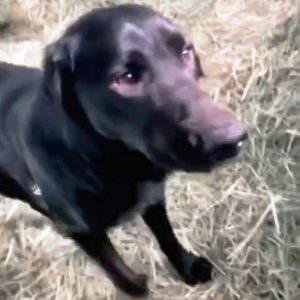 Aengus steps forward cautiously. The horse’s mother leads him gently to her child. The dog is overwhelmed by the sight of the lovable foal. He happily bends his head to kiss it. Aww! The animals at this shelter are so lucky to have such a hard-careful and kind dog by their side! 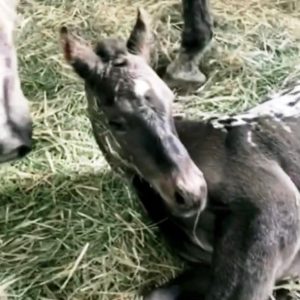