A Goose warming an Abandoned Puppy with his Wings 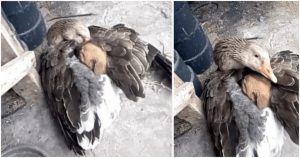 It’s incredible how animals can feel deep empathy just like humans. Animals keep showing us with their actions that love really knows no boundaries. This post about a nearly frostbitten goose warming an abandoned puppy has gone viral on Facebook. It shows a big act of kindness. 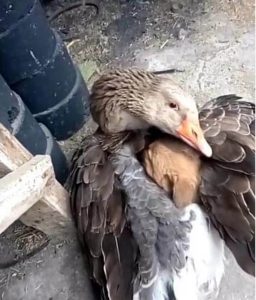 The goose found the little puppy who was shivering on the side of the road after his mother abandoned him shortly after she gave birth to him. The goose protected the puppy from shivering to death by using his wings to keep him warm. Without the puppy being his own baby he also pet the puppy on his head with his beak. The goose really cared for the puppy and lovingly took the role of a mother. 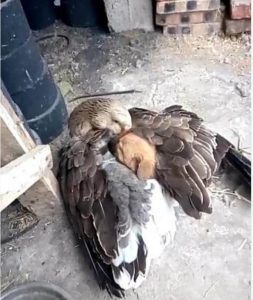 A photographer found and saved the goose and the puppy. Right after uploading this emotional moment they went viral. They adopted them together in a home environment so their inseparable formed friendship can last forever.